In April, the United States Supreme Court issued a decision that could drastically expand the scope of activities requiring a permit under the federal Clean Water Act (CWA or Act). The case, County of Maui v. Hawaii Wildlife Fund, involved a wastewater reclamation facility in Hawaii that pumped treated waste water into groundwater injection wells, from which the effluent would enter groundwater and flow to the Pacific Ocean. 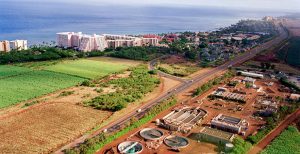 The Court held that, even though the effluent traveled through groundwater (a non-point source) before entering the ocean, this activity required a CWA permit, because it was “the functional equivalent of a direct discharge from the point source into navigable waters.” In doing so, the Court introduced a new test for determining whether indirect discharges, i.e., when point-source discharges of water pollution enters a non-point source (such as groundwater) before traveling to a water body covered by the CWA, required CWA permits.

The holding is particularly relevant to wastewater treatment facilities who pump treated effluent into groundwater wells, since that is the particular fact pattern at issue; however, it is also relevant to any point source discharger from whom pollutants could travel through groundwater or another non-point source into waters of the United States.

The CWA prohibits the “discharge of any pollutant by any person” into the waters of the United States without that person obtaining a permit from the United States Environmental Protection Agency (EPA) under the National Pollutant Discharge Elimination System (NPDES). The Act defines “pollutant” broadly to include, among other things, any solid waste, sewage, and industrial, municipal, and agricultural waste discharged into water. A “discharge of a pollutant” is any addition of any pollutant to navigable waters from any point source. A “point source” is any discernible, confined and discrete conveyance, including but not limited to any pipe, ditch, channel, conduit, or well, from which pollutants are or may be discharged.

Less clear is whether, and to what extent, a NPDES permit is required for discharges of pollutants to non-point sources, such as groundwater. Regulation of groundwater has traditionally been left to the states and not the federal government under the Act. Practically speaking, non-point source pollution is rarely traceable to any single discrete source and is, therefore, difficult to regulate through individual permits.

Not too long before the Court’s decision, in November 2019, the federal court in Massachusetts acknowledged the ambiguity inherent in the CWA’s application to discharges of pollutants into groundwater. In Conservation Law Foundation, Inc. v. Longwood Venues & Destinations, Inc., the District of Massachusetts deferred to EPA’s April 2019 interpretative statement on the issue and held that “discharges into groundwater are categorically excluded from the CWA’s regulatory regime, irrespective of any hydrological connection to navigable waters.” Thus, the Supreme Court’s decision in County of Maui nullified what was the (not at all longstanding) prevailing law on this issue in Massachusetts.

The Court’s Decision and the New “Functionally Equivalent” Test

Unfortunately, by resolving one ambiguity, the Court may have created more confusion instead of clarifying the law. The majority essentially staked a middle position between two arguments. The petitioner, the County of Maui’s wastewater treatment facility, argued for a bright-line “means-of-delivery” test where only direct discharges from a point source to a covered water required a permit, focusing on the manner in which the pollutant is conveyed to the covered water. The respondents, several environmental groups who filed a CWA citizen suit against the water treatment facility, argued for application of the Ninth Circuit’s “fairly traceable” test, which would have required a permit whenever pollutants are fairly traceable from the point source to a navigable water. The U.S. Solicitor General submitted an amicus brief in support of the petitioner and arguing for the application of the EPA’s April 2019 interpretative statement. The Court declined to grant deference to the EPA’s interpretation, because no party had requested it and because a total exclusion of all discharges through groundwater “would open a loophole allowing easy evasion of the [Act’s] basic purposes.”

The first two factors, time and distance, will be the most important factors in most cases.

The problem with this new test is that it introduces a number of new ambiguities to replace the original ambiguity over whether discharges to groundwater required a CWA permit. The Court acknowledged these shortcomings: the list of factors is not exhaustive (“courts can provide guidance through decisions in individual cases”); the two factors which the Court said are most important will “not necessarily [be important in] every case;” and even when time and distance are important, there is only a sliding scale of the acceptable range (a permit is required somewhere between “[w]here a pipe ends a few feet from navigable waters” and “[i]f the pipe ends 50 miles from navigable waters and the pipe emits pollutants that travel with groundwater, mix with much other material, and end up in navigable waters only many years later”).

During a status conference in federal district court following the decision, the Maui wastewater facility declared its intent to proceed to discovery and prepare its case for trial in light of the Supreme Court’s ruling. Both parties will have an opportunity to submit additional briefs on discovery issues, which the district court will hear in a further status conference at the end of June.

In combination with the EPA’s newly-promulgated Navigable Waters Protection Rule revising the definition of “waters of the United States,” which takes effect on June 22, 2020, the Supreme Court’s decision marks a major shift in CWA permitting.

We will continue to monitor judicial and administrative developments under the CWA as courts and the EPA apply this new “functional equivalent” test. For any questions regarding this evolving area of the law, please reach out to the attorneys at Mackie Shea Durning, PC.