Last July and August, MassDEP sent a Request for Information (RFI) to all large construction and demolition (C&D) waste handling facilities regarding their compliance with the Minimum Performance Standard (MPS) guidance adopted by the Department in February 2020.  In very brief summary, the MPS guidance established a minimum 15% “Process Separation Rate” (PSR) for large C&D handling facilities (including both C&D processing and large C&D transfer stations).  In addition, a facility must remove waste banned materials “to the greatest extent possible” meaning that 15% removal is the floor and “the greatest extent possible” is the ceiling.  The MPS guidance is designed to provide a clear standard for C&D facilities to comply with the Department’s waste bans on disposal or transfer for disposal of the four C&D waste ban materials: wood; asphalt pavement, brick, and concrete (ABC); metal; and clean gypsum wallboard.  These materials have been banned since 2006[1] under the Department’s Solid Waste Management Facility Regulations at 310 CMR 19.017.

The Department’s RFI was intended, in part, to generate information on each individual facility’s compliance with the MPS guidance, and, for non-compliant facilities, their plans to come into compliance.  On January 29, Michael Elliott, MassDEP’s Asbestos and C&D Program Coordinator, presented the following slide compiling the C&D facilities’ responses for early CY2020 operations: 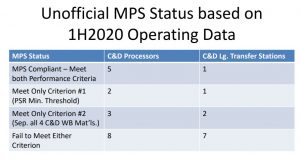 However, based upon Mr. Elliott’s presentation, it appears that many facilities are working towards compliance through the acquisition of new equipment and planned changes in operational practices.  C&D processing facilities will need to demonstrate that they are meeting both the 15% PSR and that they are removing all four categories of C&D waste ban materials “to the greatest extent possible.”  Like “Best Available Control Technology” or “BACT” requirements for sources of air emissions, the MPS guidance will eventually have an upward ratcheting effect on processing facility separation rates.  Once one C&D processing facility shows that separation at a rate greater than 15% can be achieved, others will need to follow suit or demonstrate why such a separation rate is not “possible.”  Large C&D transfer stations will likely comply by limiting acceptance to only C&D residuals from a compliant processing facility or by transferring all C&D to a compliant processing facility.  This too should drive recovery of waste banned materials from C&D.

It is important to note that the MPS guidance is really just another step in the evolution of the Department’s waste ban policy.  The concept of removal of waste banned items “to the greatest extent possible” is not new.  Under existing regulations, facilities are required to adopt and comply with Waste Ban Compliance Plans in accordance with 310 CMR 19.017(6).  As long as a facility remains in compliance with its approved plan, it is in compliance with the regulations.  Since at least 2014, the Department’s Guidance for Solid Waste Handling and Disposal Facilities on Compliance with MassDEP’s Waste Bans has required that a facility’s Waste Ban Compliance Plan “must demonstrate how the facility will, to the greatest extent possible, separate out from waste loads banned materials for subsequent reuse or recycling.”

What is new in the MPS guidance is the bright line minimum of the 15% PSR performance criterion.  Under the previous Guidance, the Department took the position that “while MassDEP may take enforcement for any amount of waste ban materials that MassDEP observes in a shipment destined for disposal, a solid waste management facility is only required to take action in accordance with Section VIII of its approved Waste Ban Plan for unacceptable loads.”  A facility that identified such a load could remain in compliance with the waste ban regulation simply by following Section VIII of its Waste Ban Compliance Plan, which required the facility operator to communicate with the driver and the generator of the failed load and manage the failed load according to a hierarchy ranging from rejection of the load to disposal of that portion of the load that cannot be separated and reloaded, rejected, or recycled.  But nowhere was there a clear requirement to achieve a 15% minimum PSR.

For any questions about how these developments may affect your facility, contact the attorneys at Mackie Shea Durning, P.C.