On March 11, 2021, the Massachusetts Supreme Judicial Court (SJC) issued its decision in the litigation among Concord, Littleton, and Acton regarding the Towns’ respective rights to use Nagog Pond as a drinking water source. 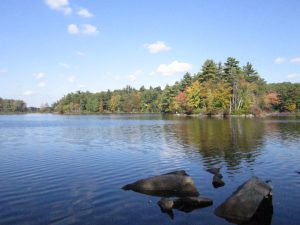 Mackie Shea Durning PC successfully represented Concord in the SJC and in the prior proceeding in the Land Court on this Water Law case.

All three towns were given rights to access Nagog Pond from an act of the state legislature in 1884, but Concord is the only town that has exercised its right of withdrawal. Concord exercised its rights under the 1884 Act in 1909 and has been using Nagog Pond for drinking water ever since. Following the passage of the Water Management Act (WMA) in 1985, Concord applied for and received a Registration from the State which grandfathered its existing withdrawal volume at Nagog Pond.

The central issue in the litigation was whether Littleton and Acton could supersede Concord’s WMA Registration based on a provision of the 1884 Act that reserved a priority withdrawal right for those two towns.

The SJC concluded the 1884 Act remained viable and still gave each of the three towns the ability to use Nagog Pond as a water supply. However, the SJC also ruled the legislature’s decision to adopt the WMA and its structure of protecting and grandfathering existing withdrawals under a separate classification of registration, effectively repealed the priority provision in the 1884 Act.

Mackie Shea Durning PC specializes in environmental law and has deep experience in a range of water supply and wastewater issues, supporting cities, towns and developers to address critical drinking water supply and wastewater management goals. The team of attorneys working with the Town of Concord on this matter included Peter Durning, John Shea, Gail Magenau Hire and Peter Vetere.