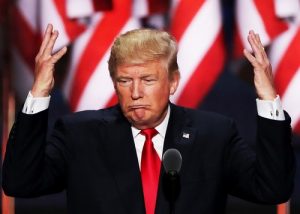 Since Trump’s inauguration, friends and colleagues have been asking, “what impact will President Trump have on environmental law?” Along with the rest of the nation (and world), we are waiting to see just how far Trump will push his anti-environment agenda.

Here are a few observations from the dizzying first 90 days:

Each of the first 90 days of the Trump Presidency has presented another attack on federal environmental protection. The President of the United States’ (“POTUS”) war on the environment is well-underway:

POTUS’ Address to Congress on February 28 paid lip service to an intent “to promote clean air and water,” that is belied by proposed Draconian budget cuts and assaults on air and water protections. His claim that “every American child deserves a much brighter future” is not supported by an agenda of reducing protection of air and water that actually endangers the present and next generations. His Messianic mission to make America great again focuses on increasing corporate profits, buying more F-35s, and building a $21.6 billion Wall (based on an internal Homeland Security report) instead of protecting public health and the environment. POTUS and Pruitt should use a “scalpel” to reduce burdensome regulations and achieve a better balance of environmental and economic interests, a goal that most people can salute.

Former EPA Administrator and Boston’s own Gina McCarthy is rightfully concerned by the proposed cuts at EPA, the edict that bars EPA staff from speaking to the media, and the rejection of science-based decision- making. She hopes States like Massachusetts will lead the way on climate change and environmental issues. We expect Gina will continue to shine a bright light on POTUS’ attacks on environmental protection. We look forward to her address to the Boston Bar Association on May 24, 2017 and her keynote speech at the Environmental Business Council Annual Awards on June 8, 2017.

For the next four years, monitoring the Trump war on the environment will be like watching a train wreck. It will be horrible, but we won’t take our eyes off it. Perhaps our morbid curiosity may help us discover solutions. Maybe POTUS will realize there are jobs and profits in the environmental engineering and science, green energy, and equipment manufacturing sectors that offset reductions in fossil fuel and traditional polluting industries.