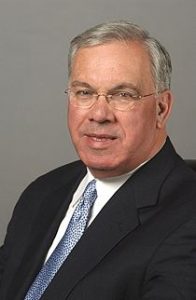 Thomas M. Menino, the longest serving, beloved 53rd Mayor of Boston (1993-2014), had many career accomplishments, some of which are covered in his memoir, Mayor for a New America (2014): his 2011 Climate Action Plan; the 2010 launch of the Innovation District on the South Boston waterfront; the transformation of Beantown to Greentown with LEED construction, tree planting, and recycling initiatives.  At least three achievements enjoy legacy status in 2020.

After his retirement in 2014, Mayor Menino was appointed Professor of the Practice of Political Science at BU and served as Co-Founder and Co-Director of the BU Initiative on Cities, an urban leadership research center bridging the gap between the academic study of cities and the real world practice of urban governance.  He created the Menino Survey of Mayors, a survey of the most pressing challenges that keep U.S. mayors awake at night.  The 48-page sixth edition 2019 Survey (www.surveyofmayors.com) covers infrastructure priorities, mobility and public safety, car culture, the changing nature of work, opportunity zones and climate change.  There are some noteworthy results.  Forty-five percent of mayors believe infrastructure is the most significant issue, and the “big ticket” items need investments in water, wastewater and stormwater.  Seventy percent think cities must have a strong role in reducing the effects of climate change, even if revenues are sacrificed or financial resources are expended.  Seventy-six percent believe cities are too dependent on cars and 66 percent believe cars are the largest source of greenhouse gas emissions.  Surely, the 2020 Survey will consider the municipal and business impacts of and responses to the coronavirus.  It is disappointing to consider the lost opportunity for critical infrastructure funding.

In January 2013, Mayor Menino directed the Conservation Commission to recommend guiding principles for drafting a local Wetlands Ordinance to address Boston’s vulnerability to the effects of climate change and coastal flooding, and to ensure developments around Boston Harbor take appropriate cost-effective measures to prepare for the foreseeable effects of climate change on safety and the economy.  In August 2013, the Conservation Commission issued Recommended Guiding Principles, including review of projects for the effects of sea level rise within Land Subject to Coastal Storm Flowage (LSCSF) and the Buffer Zone, and compliance with to-be-developed performance standards for more intense and frequent storm events throughout the project’s life cycle.  In December 2019, the Boston City Council and Mayor Walsh approved a Wetlands Ordinance with a goal to protect Boston against climate change impacts and to promote climate resiliency.  Applicants, lawyers and consultants wonder how quickly the Commission can adopt appropriate implementing regulations and maps for Inland and Coastal Flood Resilience Zones, especially with the suspension of governmental functions due to the coronavirus.

For the Coastal Flood Resilience Zone, the Commission has discretion to determine whether the area beyond LSCSF “has a reasonable probability of becoming subject to future coastal storm flowage or tidal action due to seal level rise (SLR) within approximately the next 50 years.”  For the Inland Flood Resilience Zone, the Commission has discretion to determine whether the area of land beyond Land Subject to Flooding “has a reasonable probability of flooding as the strength, duration or frequency of precipitation events increase within approximately the next 50 years.”  Applicants will need to muster permit teams with the engineering, environmental science, and meteorological expertise to predict SLR and flooding.  These new evidentiary requirements will be fodder for project opponents challenging the science of predictive climate change and effects that will trigger debates, delay and appeals.  The Ordinance creates a Waterfront Area within the buffer zone to resource areas and allows the enlargement of the MassDEP Wetlands Protection Regulations Riverfront Area from 25’ to 200’.  The Commission’s jurisdiction is expanded to regulate activities which will “pose a significant threat to alter” resource areas, even if such work is not within resource areas or buffer zones.  This arguably allows the review of traditionally upland, non-jurisdictional areas under the Wetlands Protection Act.  Applicants have a burden of proof “by a preponderance of evidence that the work proposed…will not have an unacceptable significant or cumulative adverse effect upon the Resource Area Values protected by this Ordinance.”  The Commission should adopt regulations with objective criteria for SLR and flood elevation 50 year predictions to guide an otherwise discretionary decision by the Commission.

Water transportation via ferries, water taxis and shuttles in Boston Harbor serves commuters, convention attendees, airport travelers, and Encore gamblers in all seasons and weather conditions.  Tourists and recreationists use ferries.  In 2002, Mayor Menino released the “Long Island Limited Public Access Plan” which recommended water-based access as the best means for Boston to establish public access to Long Island, to limit impacts to Quincy neighborhoods, to address the inadequacies of the then existing land-based bridge, to protect people using the existing health facilities, and to preserve the natural, historic and archaeological resources on Long Island.  Fast-forward to October 2014, when Boston abandoned the old health facilities, and in 2015 demolished the bridge.  In 2018, Boston proposed to place a $100 million new bridge on 70-year old concrete piers that show deterioration, and which need an additional 75-year design life.  Opponents to the new bridge and pier reuse project argue for the use of ferries (and helicopters in medical emergencies) to access the yet-to-be designed addiction health care facility.  There is litigation challenging the adequacy of Boston’s alternatives analysis which did not fairly consider the reliability and feasibility of the use of ferry service to transport patients and support services to Long Island.  Mayor Menino, the Champion of Neighborhoods, was prescient in his endorsement of ferry service to Long Island in the 2020s and Beyond.